When we arrived in Austin on Saturday night we figured out that we were lucky enough to be within walking distance of a BBQ place recommended to us, Sam's Barbecue.  This place was a real trip- the food was great.  They were also providing free margaritas and hosting a live "band" on the porch (the porch was an enclosed part of what appeared to be the owner's dilapidated home, with office chairs for about 10 people).   Check out the pic below; words do not do this place justice. 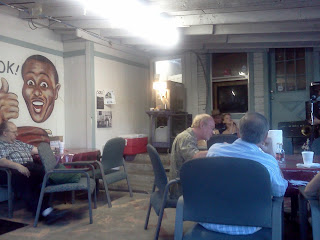 On Sunday we started some real Austin exploration.  We did not hit any breweries per say; but we did visit The Flying Saucer for lunch, which was hosting Texas pint night with local brews for only $3.  I had the Independence Brewery Convict Hill, a tasty and robust oatmeal stout. Matt was not too thrilled with the Austin Beerworks Pearl Snap Pils he chose.  Following lunch we visited the Zilker Botanical Garden, a smaller botanical garden surrounded by city traffic. Later we hit Uncle Billy's Brew & Que.  We enjoyed sampling this brewpub's beers and smoked meats.  We really liked their Agave Wheat and Hop Zombie IPA.  There was also a good local musician playing named Philip Q Morrow.  Overall, we had a great time there. 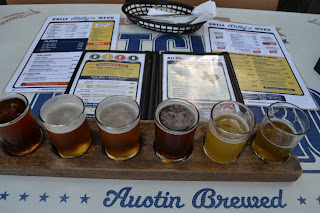 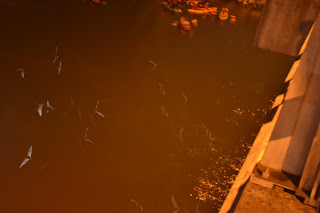 We closed out the evening by riding a tandem bike, that was generously provided by the owners of the place we are crashing, to see the Congress Avenue Bridge Bats.  Although the tandem bike ride through some interesting Austin neighborhoods was a bit daunting, the bat views were very rewarding.
Posted by Sheri at 8:51 AM